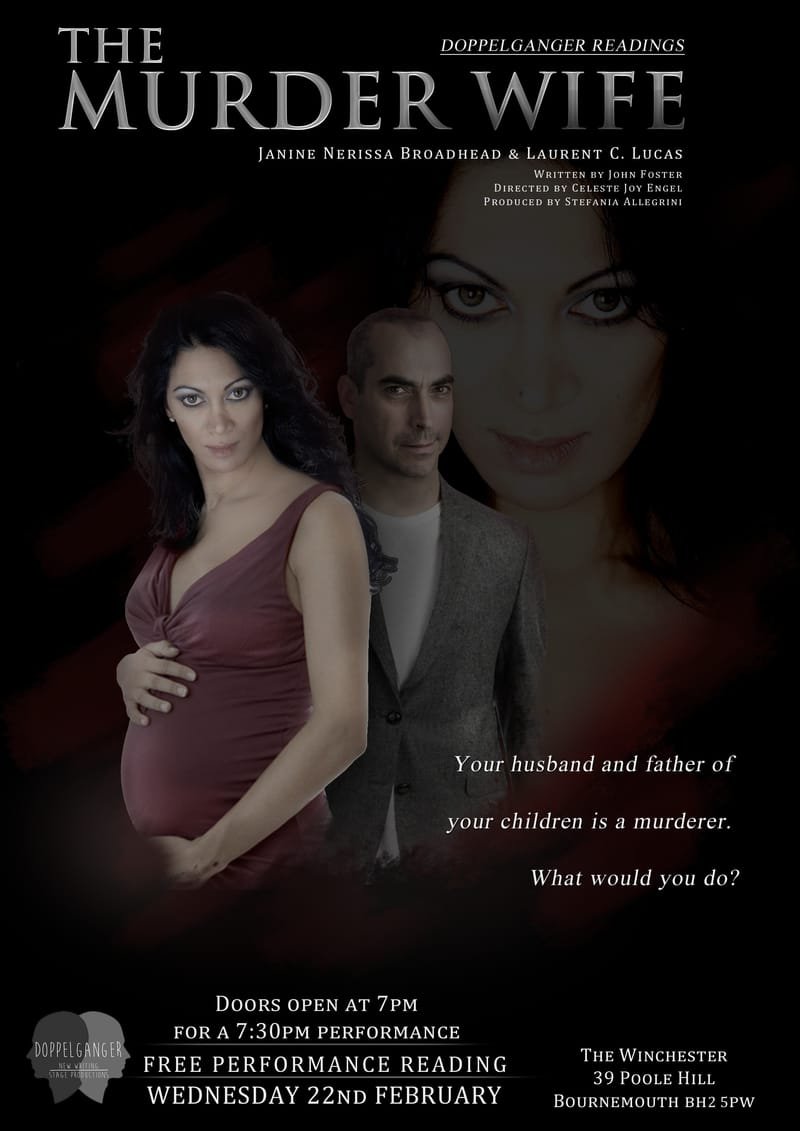 DOPPELGANGER READINGS - The third of our monthly script-in-hand Doppelganger Readings.

Home is where the heart is...

Your husband is a murderer and what the hell do you do?

Step into the world of Gina, better known as Mrs Gina Bellemy, a wife with a secret. Meet Robin, her so-called better half.

Enter an ordinary, suburban home where things are not quite as they seem and ask how far would you go for love?

What is it like to wake up on an ordinary day in a suburban home along the quiet streets of houses and come to the realisation that your husband is a serial killer? The father of your children – the man you are again pregnant by – is the monster of the banner headlines?

The murderer by strangulation of several young women. All of them brunettes women like you. Doubles of you.

Your husband has been murdering different images of you.

I had the good fortune to see a rehearsal of The Murder Wife by John Foster before it makes its way to London. Performed by doppelgänger’s Janine Nerissa Broadhead and Laurent Lucas, it followed a tale of conflict and inner turmoil as A woman comes to terms with her husband being not only a serial killer but also having a deeply disturbing criteria for his victims.

Meanwhile Robin (the husband) callously and bluntly reflects on his thoughts and the deeds he has done coming to a bittersweet conclusion.

The play touches on many dark facets of human emotion and desire as well as all to real issues such as social insecurity and victim shaming.

I was captivated by the performances and relieved by twinkles of dark humour, I wouldlove to see it in London sometime.

Recently watched a rehearsal of John Foster’s The Murder Wife before it goes to London.

Intense and convincing performances from both actors: we flit between a woman’s (Janinev Nerissa Broadhead) inner struggle with the fact that the father of her children is a serial killer, and his (Laurent C. Lucas) side of the story; a man who must come to understand and accept his own said monstrosity.

The play (influenced by real-life murder cases) handles multiple themes, amongst them the power of maternal and spousal love, whether the capacity for evil is down to nature or nurture, and the media’s fascination with murder. Needless to say, subject matter is often bleak and disturbing, but a captivating watch punctuated by moments of dark comedy – time slips by in the hour-and- a-half runtime.

Wishing very best of luck to cast and crew for their next performance!