HAP - A Play about Happines 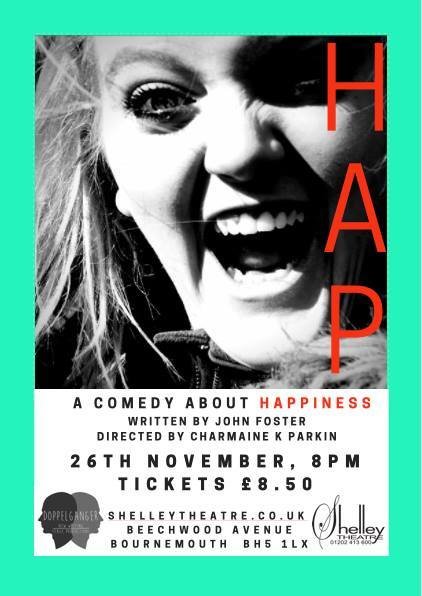 This was a play about happiness, or was it? Could it have been about sadness or loneliness? I expect if you asked the audience you would get a lot of different views.

The writer John Foster certainly has a way with words and I would be interested to read other plays by him. The direction was tight and made good use of the stage especially as there were only two people and one was seated behind a desk for a lot of the time.

The opening didn’t convince me as it was difficult to hear the Doctors lines over the very loud music and I am not sure why she broke into the disco bit. However when the patient entered, the play really got going.

HAP played by Nicola Lauren Stringfellow and Doctor Marples played by Emma Loveday were superb. This was an hour plus of non-stop action, which kept the audience on the edge of their seats wondering what would happen.

Both characters played their parts to perfection with good pauses and facial expressions but never letting the pace drop. Well done to both of you as it is very difficult to laugh on cue and also quite a marathon to learn.

"You're a pathological optimist." So says Troy Dyer – Ethan Hawke's charcter in the 1994 film, Reaity Bites. But can a person be excessively happy? Real life physician Hunter ‘Patch’ Adams was criticised many years ago in his official medical school record for "excessive happiness"... In John Foster's new comedy HAP, which is directed Charmaine K Parkin, questions regarding the necessity of happiness and 'negative' experiences to give life meaning are deftly explored. Nicola Lauren Stringfellow plays the euphoric HAP, while Martha Marples – the GP she come to for help – is played by Emma Loveday.

To give the play its context, much time is given at the beginning with Marples when she's alone in her room at the practice. A sufferer of depression, she spendS some time willing herself 'in the right head space', so that her emotions don't interfere with her professional judgement during the working day. Much time is also devoted to her writing in notebook – as much a cathartic exercise as a distraction from dealing with the job at hand.

The sound of uncontrolled laughter from outside the room cuts through the ambience like a knife, not unlike the 'lunatic' on Pink Floyd's Dark Side of the Moon. What will win in the end? The unfettered jovality of HAP or the composed introspection of Marples?

After a long discourse involving HAP convincing Marples that her malady is for real and that she wants help, Marples repeatedly tells her how lucky she is. But HAP's argument has a logic to it – that without the ability to experience the other spectrum of emotions, how can she be a 'fully functioning human being'? If nothing else, being always 'happy' when friends are experiencing hard times raises questions about the development of one's capacity for empathy, with potential detrimental effects on relationships.

Plays that scrutinise the DNA of comedy and laughter in an objective fashion such as Trevor Griffiths' Comedians and Terry Johnson's Funny People, often have as serious point to make about its place in our lives. While Foster's play is a 'fantasy' with a heightened reality, this doesn't detract from the play's astute message about the quest for emotional well-being, especially between women.

During the Q&A at the end of one performance, a member of the audience – a man of about 50 – asked why two women were written, instead of having at least one man. The lack of female-only plays was raised, but the answer I liked best was the unique dynamic that two women have on stage. A male GP automatically suggests the patriarchy subjugating the freedom of women to feel however they feel, but woman to woman it is a discourse about being in touch with one's emotions – whatever they may be – and acknowledging them without judgement.
Michael Davis 2016