THE RAMPANT BULL AND THE PATHETIC PANDA 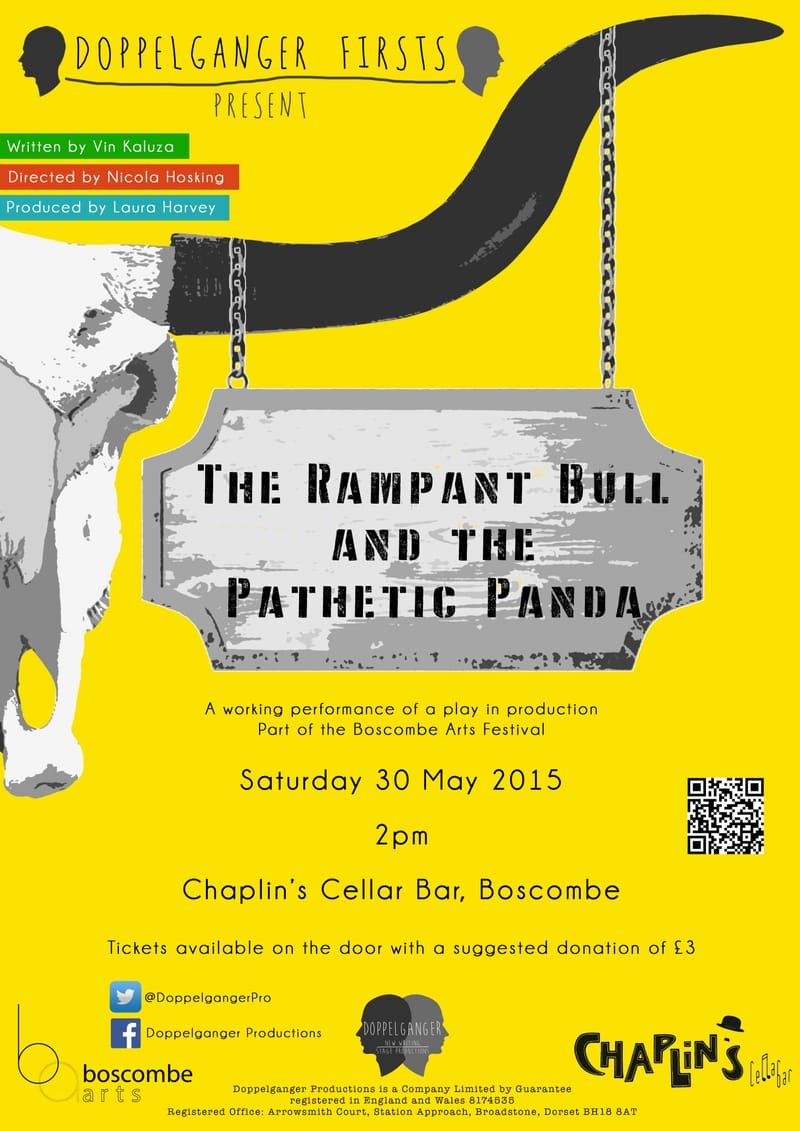 THE NOT SO PATHETIC – MORE OF A GIANT – PANDA: A REVIEW BY JANE SKELLET

Well, this was the first of the ‘Firsts’ for the Doppelgangers.

For a few years now, they have been meeting every month on a Saturday afternoon, to help nurture and encourage new writers with their scripts and stories.

I well remember – just over a year ago – when Vin Kaluza introduced us to ‘something he was working on’ – and how he was experimenting with writing a whole play for just one character. He had actor Steve Rollins with him, ready and prepared to render a reading of the first section, opening with the memorable malfunctioning toilet – a symbol for the malfunctioning life of his would-be hero, Bracey.

So it was with high anticipation that I joined the full-house of Doppleganger supporters in Chaplin’s Bar in Boscombe on Saturday afternoon, to see how Vin’s idea had grown into a full piece. And what a full piece this is! If Vin had reservations about one character sustaining a full-length drama, then Steve gave us a tour-de-force performance, animating a cleverly crafted script, which uses all the storyteller’s techniques to have us believe that there are at least another half dozen characters popping in and out of the patchwork of anecdotal scenes that take us on Bracey’s hellish attempts to break from a life of crime – and grime.

Presented as a rehearsed reading, the quirky little theatre space in the Cellar Bar with its jazzy murals leant just the right atmosphere of intimacy, as we were drawn into Bracey’s cage-like life of violence and domestic turmoil; and the technique of screwing up the pages of script as they were spent, and watching them pile up around the stage, was a clever way of incorporating the physical script into the action, whilst also symbolising the gradual destruction and waste of Bracey’s life.

Director, Nicola Hosking and producer, Laura Harvey have worked some magic here to bring this all together in such a polished presentation that maintained the tension and suspense throughout the afternoon with such limited resources.

And it’s also a tribute to John Foster’s hard work in setting up the Doppelganger Dialogues network that encourages new writers in developing their work; and to Nick Taylor, who is now the main co-ordinator, looking forward to developing a further series of ‘Firsts’ – as other new writers will have opportunities to see their work presented for an audience.

One thing is for certain – the art of good storytelling is in good hands at Doppelganger.

A WORKING PERFORMANCE OF A PLAY IN PRODUCTION.

PART OF THE BOSCOMBE ARTS FESTIVAL. PRESENTED BY DOPPELGANGER FIRSTS.

Don’t worry. You’re about to meet a man who’s just come out of prison for acts of extreme violence, but he’s calmed down now. The anger management counselling has worked. He’s a changed man. He’ll be able to cope with the problems of going straight. His lowlife old mates and criminal connections won’t drag him down, won’t bring the old bad habits back to life. He’ll impress the family court with his sobriety and clean living and be able to restore relations with his children … Maybe.