THE WEEVIL IN THE BISCUIT 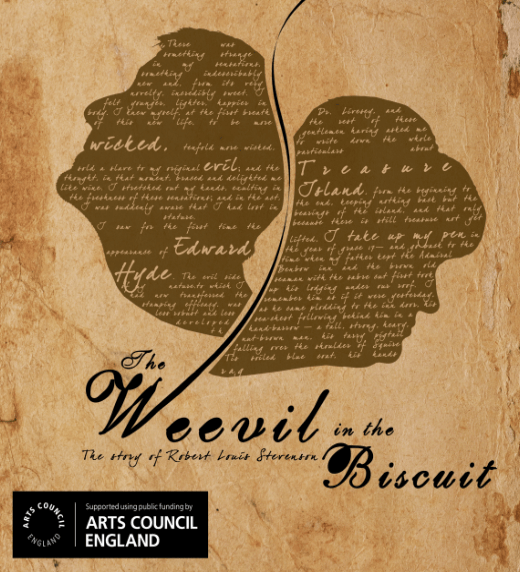 The weevil in the biscuit is a 70-minute play performed straight through (no interval) followed by an after show q&a with the writer, director, cast and audience.

Check out these vlogs from our designers Marie Austin and Maria-Helena Farah. Want to know exactly what goes in to creating a performance? Follow this blog by Doppelganger Girl Lauren Stevens, our production intern. Settling in Bournemouth with Fanny, his whirlwind American wife with whom he enjoyed a tempestuous relationship, Stevenson sought to stabilise his chronic state of health in climes milder than his beloved Edinburgh. Writing The Strange Case of Doctor Jekyll and Mr Hyde proved to be as dramatic and psychotic as the tale itself.

The play dramatises the loving yet combative relationship between Stevenson and Fanny, with Stevenson almost wholly dependent on her for his physical well-being and emotional stability. Yet the famous author of Treasure Island took to heart Fanny’s critique of the first draft of his new work and this conflict is at the centre of the play, a two-hander between Stevenson and Fanny with the audience cast in the role of a Bournemouth literary group visiting Skerryvore. Bedridden, inspired by a nightmare, Stevenson feverishly wrote the novella in three days, working without pause, only to destroy the first version. Over the next ten weeks, much of it spent in bed, pages scattered across the counterpane, the almost bankrupt Stevenson compulsively wrote and rewrote until his masterpiece was complete. During this febrile period of creativity, Stevenson was continually haunted by his darkside, the Edwards Hyde within him, his self-destructive impulses continually threatening to undermine the respectable front of his Bournemouth lifestyle.

Stevenson was often too ill to leave the house or even his bed. He nevertheless wrote with superhuman energy, likening the creative demon inside him to that ‘pallid brute’ Edward Hyde. Stevenson’s uneasy coexistence with upright Bournemouth society was like being ‘a weevil in a biscuit.’